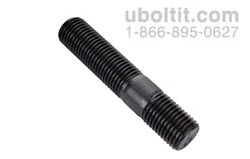 Tap End Stud Bolts have a short thread on one end, called the tap end which is threaded to a Class NC5 or Class UNC-3A fit. This end is for screwing into a tapped hole. The other nut end is threaded with a Class UNC-2A fit. Length of the stud is measured overall. The tap end has a chamfered point, but the nut end may have either a chamfered or round point, at the manufacturer's option.

March 21, 2016 - am responding to your letter you sent and I will have to say your company is doing a very good job and I also want to mention the sales person JR. He is very knowledgeable and is a very big asset to your company. Thanks again for your product and keep up the good work.